This tutorial is a step of my other tutorial: Mini Portable Multimedia Server Plex Raspberry Pi 3.

Since the videos will be read on mobile devices (iPads in my case), Plex has the function of Optimization.

Why Optimize? To avoid transcoding. What is transcoding? To be played on all devices (iOS, Android, webTV etc.) Plex Server decodes and re-encodes the movie being played on the fly to improve its compatibility with the device that binds the media (film / series .. .). This operation requires a lot of resources especially CPU, and the Raspberry Pi does not have much compared to a real PC.

The goal of this tutorial is to optimize the videos in order to minimize the need for transcoding, reduce the need for CPU and therefore improve the fluidity of reading.

It is possible to optimize the videos one by one or all the contents of a library in a single operation.

1. To convert the videos one by one, go to your library, put the mouse pointer on the cover of your video and click on the three small dots. Select the “Optimize” option. 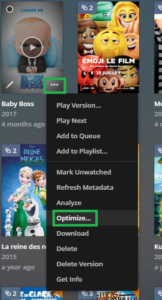 2. In the new window you can choose for which type of device you want to optimize the video (Mobil device in general, TV, or custom). Make your choice, personally I want to optimize my videos for an iPad, so I select “Custom”, I give a name “iOS 2Mbps 720p”, I select “iOS” and “2Mbps 720p”. In the “Version storage location” section I do not change anything, I leave “In folder with original items”, so Plex will create a folder named “Plex Version” in the folder where the original videos are and it will place the optimized versions in this new folder. 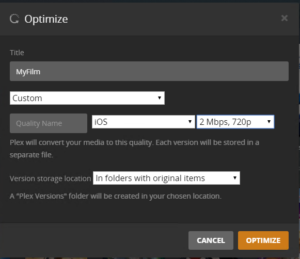 4. Once the optimization is finished, go to folder where your movies are, there you will see a new folder named “Plex Version” which itself contains subfolders with the name of the type of optimization corresponding to your choice of point 2. In my case, the subfolder is called “iOS 2Mbps 720p 134” and it contains new versions of my movies optimized for the iOS. I do not know why, but the name of the files has been adapted.

To optimize all the contents of a library is almost identical, go to the library, in the upper right click on the three small dots and select “optimize”. You will come to the window of point 2. The only difference with the method “optimization one by one” is that here you can limit the number of movies to optimize. Wishing to optimize all the videos of the library, we uncheck the box next to “limit to 5 items”. 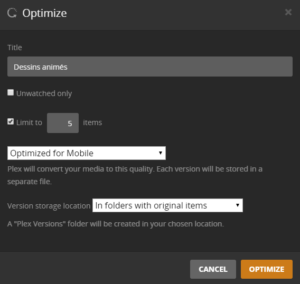 ATTENTION: even if after the optimization the size of the films is smaller, it is necessary to envisage enough space on the disc which contains your films because you will have your films in duplicate, the original version and the optimized version.

24 hours later, the optimization finished, I took all the films from the folder “Plex Version / OS 2Mbps 720p 134”, I copied them to the hard drive for my portable media server.

This site uses Akismet to reduce spam. Learn how your comment data is processed.